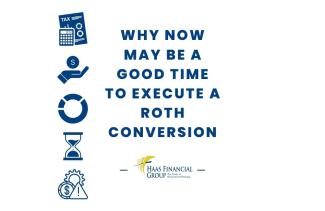 A topic that’s becoming more and more popular with clients revolves around Roth IRA’s. In case anyone doesn’t know, a Roth IRA is a retirement account that people contribute to with after-tax money, it grows tax-deferred, and when you pull money out after age 59 ½, it’s tax-free! There are income thresholds on who can contribute to a Roth IRA but one thing that anyone can do is a Roth conversion. A conversion is when you take IRA dollars or other pre-tax retirement dollars that you haven’t paid any income tax on, and move a portion of that pre-tax money into a Roth IRA so essentially, you pay taxes now so that you can avoid taxation later in the future.

What's the advantage of doing a conversion if you still have to pay taxes at some point?

We’ve found that clients have similar goals of wanting to find ways to limit their taxes, as well as coming up with tax efficient legacy plans that will transfer the most money to their heirs and not Uncle Sam at the time of their passing. Roth conversions are a good way to accomplish these goals even though it involves paying taxes now, but it can provide a greater, long-term reward.

Do you want to pay taxes on the “seed” or on the “harvest?”

At age 72, every individual that has a traditional IRA or other pre-tax account will have to take their required minimum distribution (RMD). At that point, you no longer have complete control over what tax bracket you will be in due to being forced to take money out of the account and pay taxes on the distribution as ordinary income. Another way of putting the question above: will it feel better to pay taxes on a known dollar amount today and control what taxes you're going to pay by controlling how much you convert versus just seeing where things go in the future? We can’t predict what the tax brackets are, we won’t know how much the money will grow, or how much you'll have to take out of your traditional IRA.

Do RMDs apply to Roth IRAs?

No! There aren’t any required minimum distributions on Roth IRAs so once it goes into that account, you’ll be able to let it grow tax-free and it gives you the flexibility to not pay taxes when you pull money out. It also ensures that anyone who inherits that account won’t pay taxes on that either. Because of the nature of the account, a Roth IRA can play a huge role in legacy planning as it allows people to transfer their wealth to their heirs and efficiently pass money to them, while also sparing them having to pay taxes, too.

When is the best time for someone to execute a Roth conversion?

Anyone who is having a low-income earning year should consider doing this. This could include someone on maternity leave, job loss or a period of job transition with no income, or in retirement but before turning age 72 (RMD age). Having lower income is a prime opportunity to take some money out, show it as income but move it into that Roth IRA where it will never be taxed again. You're able to control how much you convert while remaining in a tax rate that is comfortable to you. This is something that doesn’t only make sense mathematically, but it can also feel good to do this proactively since you’d be moving funds into what we believe is a much more advantageous spot for later in life.

Why are we focusing on talking about Roth conversions right now?

Stocks are down anywhere from 10-20%, depending on the sector of the market and bonds are down close to 10% here to start the year. There really hasn't been any safe place to hide but we know at some point, this market is going to rebound. It's anybody's guess as to how quickly that's going to happen but going back to the analogy on paying taxes on the seed or on the harvest, would you rather have that rebound or that growth occur on the pre-tax side where you know you're going to get taxed on it in the future or on the tax-free side within a Roth IRA? If you choose to convert at a potentially lower amount, you're actually taking advantage of market values being down because that growth can now happen on the tax-free side where you're not going to have to be forced to take it out at RMD age and it's going to pass tax-free to your heirs.

If you’re looking for ways to have more flexibility later in life from a tax-perspective or want to focus on passing as much of your wealth tax-efficiently to the next generation, Roth conversions may be worth considering. If you’d like to hear more about this topic, listen to our podcast. To see if this fits into your financial plan, give us a call and we’d be happy to explore this with you.