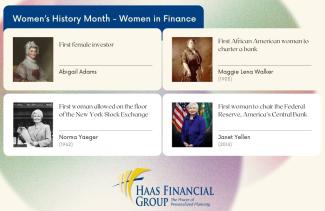 Because March is Women’s History Month, we’re recognizing a few female financial pioneers who have helped shape the financial industry for the better.  As CFP® professionals, we hope to continue to do our part by mentoring the next generation of female advisors as part of our partnership with the Kutztown University Personal Finance Program and closing the gender gap in the world of finance (currently 23.3% of CFPs are female[i]). Let’s meet some of the female financial pioneers who have helped to shape the industry and create opportunities for women in finance and beyond.

Although Abigail Adams was primarily known as the wife of founding father John Adams, she was noteworthy in her own right for fighting for financial independence during a time when doing so was largely unheard of for married women.

Not only did Adams manage the family’s household finances, but she also traded bonds and proved to have a sharp acumen for investing.  Adams invested her own “pocket” money and accrued quite the fortune which she left primarily to women in her will. [ii]

In addition to her contributions in the finance world, she also fought for civil rights in the late 19th and early 20th centuries.  She gained national prominence when she became the first woman to own a bank in the United States. Walker’s entrepreneurial skills transformed black business practices while also inspiring other women to enter the field.

Walker had always focused her efforts on accounting and math. Her first business endeavor was a community insurance company for women. From there she continued her entrepreneurial pursuits. In 1903, she founded the St. Luke Penny Savings Bank. Walker was the first woman of any race to charter a bank in the United States. The bank was a powerful representation of black self-help in the segregated South. The Penny Savings Bank not only attracted adults but Walker worked to appeal to children by passing out banks which encouraged them to save their money.

By 1924, the Penny Savings Bank had spread to other parts of Virginia and included more than 50,000 members. While other banks collapsed during the Great Depression, St. Luke’s Penny Saving survived. The bank eventually consolidated with two other large banks and moved to downtown Richmond. It is still in operation today.[iii]

When Norma Yaeger acquired her New York Stock Exchange license in 1962, she didn’t know of any other women in the industry. The Stock Exchange didn’t even allow women to step foot on its floor. But having just escaped poverty in NY’s Catskill Mountains, and determined to support her children, Norma wasn’t going to let the exclusionary traditions of the financial industry stop her from becoming a stockbroker.

During her long career she founded a mutual fund and two security brokerage firms that transacted millions of dollars of trades every day. She made fortunes and founded companies, all while raising five children. Persevering to achieve the work-home balance, Norma rose through the ranks of a male-dominated industry, opening the door for young women who would come up behind her.[iv]

American economist, chair (2014–18) of the Board of Governors of the Federal Reserve System (“the Fed”), the central bank of the United States, and secretary of the U.S. Department of the Treasury (2021– ). She was the first woman to hold each of those posts.

Once in office, Yellen began the process of reversing some of the policies that had been enacted in response to the subprime mortgage crisis of 2008. Notably, she oversaw a program to sell Treasury and mortgage bonds that the Fed had purchased to stimulate the economy. Her tenure was also noted for job and wage growth, both of which occurred while she maintained low interest rates.[v]