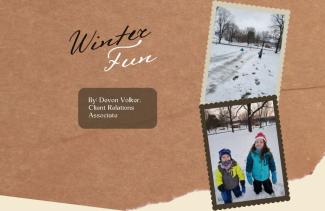 It’s inevitable that it’s going to snow in Pennsylvania.  A few years ago, I really dreaded it.  The commute, the shoveling, the messy car.  But this year I’m really enjoying the snow through the eyes of a child. My kids are now old enough to make a snowman, have snowball fights, go sledding, and help shovel!  They get excited at the prospect of snow and even more excited when they see it falling.  It makes for hours of entertainment and exercise for all of us.

Even though the snowfall this year hasn’t been much to speak of so far, we were able to go to the park on both occasions and get some pretty good sled riding in.  Mavis also decided that she wanted to try snowboarding.  We don’t have a snowboard, so she stood on her sled and rode it down the hill.  It actually worked pretty well.  I think next year we’ll probably add snowboard lessons at Bear Creek into our budget, since they aren’t cheap!

I’ve learned that the weather is a lot like investing.  You can weather the storms. You can’t change the weather and it’s often unpredictable, so why spend time worrying about it.  Only 8 more weeks of Winter and then we can start thinking about planting our garden this Spring!