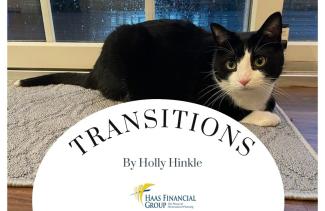 As you may have seen in a recent newsletter, I finally was able to transition my cat, Nash, from my parents’ house to my house! There’s been some hold-ups with house projects taking longer than expected and some vacations in between. I didn’t want to rush getting him to his new home because I wanted it to be as perfect (and safe) as it could be for him, but with everything in life, nothing is perfect.

The first day was quite rocky, with him wanting to not come out once he found his safety blanket (underneath the futon) and slinked around when he did which is very out of character for him. Once night came, I was woken up by meows and I had to bring Nash back to bed since he couldn’t find his own way yet. Each day has gotten better (still a few meows at night though) and he’s finally back to his energetic and curious self!

It made me realize how his abrupt move, filled with lots of uncertainty and anxiety is similar to how we all feel when life throws us curveballs. Frightened of change, yet so resilient to adapt and Nash is a good reminder that we all get used to new things, even if we’re not apt to always wanting change.

However, Nash isn’t the only one adjusting to change as this is the first time in a very long time that Michael has had a pet. Even though he doesn’t want to fully admit it, I think he’s really enjoying having someone else excited to see him when he gets home from work. Change can be scary for all of us, but with lots of positivity, reassurance, and love (to both Nash and Michael!), I believe this transition has made my house officially feel like home 😊