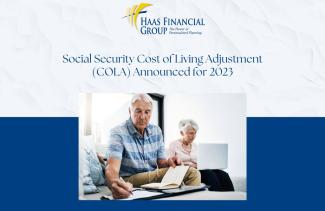 With inflation still growing and everyday costs of food, goods, energy, and healthcare continuing to rise, it was a relief for some to find out about 2023 Social Security benefits and the cost-of-living adjustment (COLA) for them. The Social Security Administration announced this week that benefits will get an 8.7% increase. On average, this will be at least an $140 “raise” per month for people in the New Year. The announcement also included a small decrease for Medicare Part B premiums which many people were happy to find out to help save a few bucks in 2023.

How does this COLA compare to the past? As financial planners, we project an average increase for Social Security of 1.5% each year. Over the last 10 years it has averaged 2.24% (last year’s 10-year average was 1.6% for context). 2022 and 2023 increases have become outliers when looking at historical data and skewed the average increase. Why is that? A lot of it has to do with the big buzzword that has been hitting the headlines for over a year now: inflation. 2023’s COLA will top last year’s 5.9% and will now be the highest increase since 1982. This reiterates people’s concern that it’s a direct reflection of Social Security’s inability to keep up with everyday expenses. Food prices are up 10.8% and medical costs close to 6.5% over the past year. Those on a fixed income will need to continue to rely on their savings more and more to fill these increasing gaps.

The bigger questions continue to be around the future solvency of Social Security, and strategies if one is not yet collecting. Here are a few additional thoughts:

Social Security decisions are incredibly important and can often be complicated. If you’re already collecting, the news this week is a welcome increase to your benefits starting in 2023. If you’re not yet collecting, we’d be more than happy to be a resource for you before you make that significant decision.