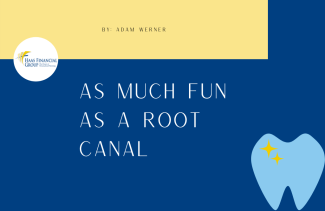 As Much Fun As A Root Canal

I’m sure many of you are familiar with the phrase, “as much fun as a root canal”, as a way to describe something that is anticipated to be the opposite of fun. Now for as much as I love sarcasm, and for those that know me well, know that I am a big fan, I had the “opportunity” to experience the root canal part recently and now know exactly what that felt like.

So, what did I do or not do to earn such a pleasure? Well let’s flashback a short 29 years when an 8-year-old Adam was pitching in a little league game in 3rd grade. I may have thrown one too many fastballs and a return line drive caught me square in the mouth…OUCH! I don’t recall if it knocked any teeth completely out and I’ll try not to be too graphic, but my two front teeth were definitely “hanging on by a thread” and there was a decent amount of blood lost on the pitching mound that day.

Since this wasn’t an injury that was going to be fixed by being told to “rub some dirt on it, kid!”, we headed to the family dentist who happened to live and work less than a mile down the road from the ball field. I was very fortunate that this happened to be one of those dentists whose office was connected to his residence. And with more good fortune on my side, not only was he home, but he was literally walking to his driveway to take out the trash when we pulled up. A bunch of cement later and my teeth were back where they were supposed to be. It made the next school day, which happened to be a field trip to a local farm, quite an adventure with a big, swollen lip. It’s a good thing elementary school children are so kind and forgiving and definitely did not come up with fun names for me for the following week (that was more sarcasm by the way ).

Now, back to the present. A few months ago, I started to feel some significant pain in one of my front teeth. As it turns out that baseball did a lot more damage than anyone had realized and a trip to the dentist sent me home with a referral to an endodontist and with some newfound knowledge of the term “tooth trauma”.

I took my time scheduling the root canal procedure since I’ve been hearing the phrase, “that sounds about as fun as a root canal”, for my entire life. I had visions of significant pain and discomfort and high-speed drill noises bouncing around in my head. When asked how I’d feel the day or week after the root canal, the endodontist told me, “You probably won’t feel much worse off than you do right now.”

Well, thankfully I’m here to say that he’s been right so far. Other than waiting for the local anesthetic to wear off after a couple of hours, I’ve felt nothing more than some slight pressure and discomfort here and there – no real pain to report. Now I don’t know that I would call it “fun”, but it definitely did not live up to the awful expectation that was built up. I assume modern technology and advanced techniques have come a long way to making it a fairly painless process, but I’m still hoping this was the first and last time I get to experience the joys of a root canal, fingers crossed!