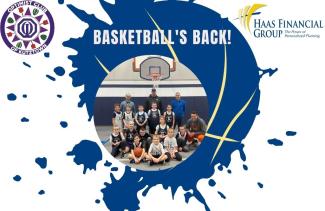 Looking back on my days playing basketball in school, it makes sense to me now that I was always going to be better suited to coach than play. I was athletic and loved the sport. But I haven’t grown an inch since I was 16 years old, and I always understood what to do better than I could actually do it. That’s just the truth. I played a bit of intramural in college, but after that, I went many years without even picking up a basketball.

Fast forward a bit and I’m now living and raising kids in the town I grew up in. I found that leads to staying involved in certain things I remember fondly as a kid, and basketball is one of those things. The same Optimist Club that ran the youth basketball program I participated in as a child is the same club I joined as an adult many years ago. Put all these things together and it made sense that I’d eventually help coach Cayden from 3rd -6th grade since Kutztown youth basketball is still an Optimist Club program.

Here we are, several years later and Gabriel is of age to play now too. So, I offered to run the program this year (not that I have a lot of extra time), and while much of that was coordination with the school district and other volunteer coaches across different levels, I did get to coach as well. With the help of some other parents, we had 36 first and second graders this year.  What a trip! In many cases, this is the first time these kids are touching a basketball. I had so much fun thinking about the best ways to communicate simple concepts to them and find drills that would making learning the basics FUN. Over the course of six weeks, we learned how to dribble and pass, how to shoot and play defense. Talking to 6- and 7-year-old kids, we’d have to teach concepts through games like “Simon says” and “sharks and minnows.” And the key was to use 8’ basketball rims so they can learn the proper forms and still reach the basket (even if it meant putting them up and taking them down every weekend)!

The last two weeks we scrimmaged. It took a lot of patience to remind kids not to sprint when they got the ball (“remember, you have to dribble!”) and to guard the same person each time down the floor. But there is nothing better than seeing a child’s face light up when they score! Or when they have an opportunity to “bring the ball up” or they make a great pass to an open teammate.

I look forward to helping for many years to come and hope the kids had as much fun playing as I did teaching. I imagine the best way for them to learn over the next 5 or 6 years is to fall in love with the game first. So that’s what I’ll try to help them do. Go Cougars!