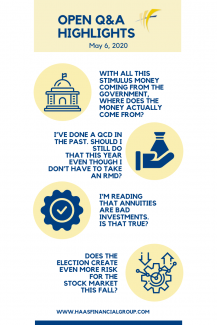 Listen To The Full Discussion Here

Don't have time for the full 40 minutes?  Transcript highlights are listed below or click here:

(3:00) With all this stimulus money coming from the government, “Where does government money actually come from? Some savings somewhere?”

(6:30) What type of risk does it pose if the government takes on this much debt?

(18:00) I’m reading that annuities are bad investments. Is that true?

(22:00) Does the election create even MORE risk for the stock market this Fall?

(29:00) Concerns over health and safety and some states opening back up